skip to main | skip to sidebar

Lord, Help me to Begin

A couple of months ago, I saw this video - a contemplation/prayer by Fr. Antonious (not sure of the last name), and wanted to share it, so I decided to translate. Enjoy!

Email ThisBlogThis!Share to TwitterShare to FacebookShare to Pinterest
Labels: Prayer


I rediscovered this song this week and remembered how much I liked it, so I decided to share it and include a translation of the words. Enjoy!
[Words before the song:
God loved mankind and created him in paradise to enjoy, and gave him authority over all creatures. But man, by his own will, broke the commandment. So he fell, got lost and strayed.]
1. After I strayed away from my God,
I struggled and labored
My state has become of weakness and fear,
And my fate is in Satan's hands
Refrain:
Lord, I'm crying to You
I'm raising my hands and calling You
Save me, Savior
Save me, Omnipotent
[Between singing:
But God did not leave man in his loss; He gave him the promise of salvation. And all generations longed to see the Savior.]
2. In the fulfillment of time
Suddenly the Beloved came
Saved me with mercy and justice
And died on the cross
Refrain
[Between singing:
And came the awaited moment that shook Satan's throne; the moment of salvation; the Savior died on the cross. Here, appears the greatest love story.]
3. Amidst the darkness of the universe,
Screaming and painful sadness
My God tasted death
And returned me from Hades
Refrain
[Between singing:
And although God saved me from my enslavement to Satan, I strayed again in the path of sin. My Lord, You know how much I've strayed and became enslaved to sin. My heart says to You...]
4. I need to return to You
For my life is in Your hands
Like a thirsty ground
My soul longs for You
Refrain
[Between singing:
God love you, yes YOU! He awaits a word from your heart in order to save you. Raise your heart to Him now; do not delay. Cry out to Him now... now!]
Refrain
Posted by Mariam Magar at 11:53 PM No comments:

For God so Loved the World

A story that came my way a while back. Enjoy!

A pagan king had a Christian minister, and because of the minister's honesty, faithfulness, wisdom, and resourcefulness, the king often enjoyed his company, spoke with him, and sought his advice. One day during a discussion the minister said, "Christ came down from heaven to save us." The king responded, "If I wanted to do something, I would command one of my servants to get it done, without myself moving or exerting any effort. Why would God himself come, take a body from a virgin, be born in a wretched manger amidst the animals, endure pain, and be crucified when He could have saved the world with one word?"
The minister asked the king to give him three days to answer his question. The minister left and went to a talented sculptor. He asked him to make a wooden statue the same size as the king's two-year-old son, and which resembled him. Then, the minister went secretly to the royal palace and met the maid responsible for the baby prince's care, and for taking him on strolls in the palace gardens in his carriage. He told her, "Listen, take this statue and dress it in clothing identical to that of the baby prince's, and put it in the royal baby carriage. The king and I will take a stroll through the palace gardens tomorrow at 5pm. When you see me raise my left arm, flip the carriage and drop the statue in the pond, and do not fear punishment." 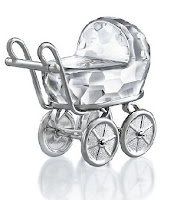 The next day at 5pm, the king and his Christian minister were sitting by the pond talking. The king asked his minister for the answer to the question that was previously asked. At that moment, the maid was approaching with the royal baby carriage that contained the baby prince's statue. The minister raised his left arm and the maid flipped the carriage. The statue, which looked much like the baby prince, dropped in the water.
The king was unable to contain himself. He ran towards the pond and dropped to the ground to snatch his son before drowning, but immediately realized that it was only a statue. He was surprised and asked about this angrily. The minister calmed him and said, "All this happened at my command, and as a result of my planning." Then he continued, "Your majesty, why didn't you ask me or one of the servants to save your son?" The king answered, "Fatherly love is what motivated me. How can I sit and watch while another person saves my son?!" The minister responded, "And this is my answer to your question."
The point is that God loves us more than parents love their children. That's why he came down to earth, was born in a wretched manger, endured pain, was crucified, and rose to save us Himself. No one else could've taken on the task of saving us. For God so loved the world that He gave His only begotten Son, that whoever believes in Him should not perish but have everlasting life. (John 3:16).

Posted by Mariam Magar at 8:08 PM No comments:

This is a summary of St. Wannas' biography found in a book called "Wannas the Martyr" by Hegumen Youannis Kamal. Enjoy!

St. Youannis (Wannas) was martyred when he was barely 12 years old. He was the only child born to a pious Christian couple, who brought him up in the Christian faith. Despite his young age, he was ordained a deacon by the bishop of the city because of his love for Christ and his spiritual maturity.
He stayed in church pretty much all the time and although he was young, he fought the spiritual war faithfully. During the days when there was liturgy, he ate from the holy bread (Orban), and during the days that had no liturgy, he asked the neighboring women to make him some bread (called Hanoun) to sustain him. He walked around the church and did everything that was necessary without ever being lazy or bored. His face shone, and it attracted the attention of everyone who saw him.
When the devil waged war on the church through persecution, the saint desired to shed his blood for Christ's sake. In a dream, God showed him that he will receive the crown of martyrdom. St. Wannas went and told the bishop about his dream and asked the bishop to bury his body in Om Qoraat cemetery in Luxor where his ancestors were buried.
The Roman commander came to the saint's town with his soldiers and looked for the believers. They heard about the deacon Wannas, and set out looking for him. They found him after he had encouraged the believers, and he did not flee from the commander or his soldiers when they found him. The commander was very angry with St. Wannas because of his courage, and the soldiers began to try a series of torture methods with the saint. They were creative in torturing him, having no mercy on his young age. During all this torturing, St. Wannas glorified God and called out for God to help him.
Finally, he was martyred on the 16th day of Hatour (third Coptic month), at the beginning of the fourth century. After the soldiers separated his head from his body, they threw his head far from his body. God guided some believers to his body, which they recognized because of his distinct outfit which he always wore (a white gown with a distinct cross on it), and they joyfully took the body to the bishop, who asked them to go search for the saint's head.
They went back and searched for the head until they found it under a palm tree and brought it back to the bishop, who respectfully put perfumes on the body, wrapped it in a shroud, and buried it in the cemetery St. Wannas asked to be buried in. The townspeople passed down by mouth the location of the saint's body in the cemetery.
When the late Metropolitan Marcos (previous metropolitan of Luxor, Esna, and Armant) was alive, the location of the cemetery was in the middle of the city, buildings were starting to appear in the cemetery, and the idea of removing the cemetery arose. The metropolitan wanted to find the body of St. Wannas and move it to a worthy place. He started fasting and praying liturgies, asking God to lead him to the place where the body was buried.
After fasting for three days without eating or drinking anything, the Lord sent an angel and showed him in a vision the location of St. Wannas' tomb inside the cemetery. The next morning, Metropolitan Marcos went to the cemetery and saw the place that the angel showed him in the vision. He then took the body of the saint amidst the deacons' singing of hymns and praises, and placed it in its current location. 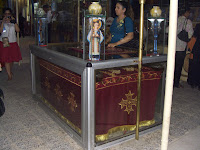 St. Wannas is known to be the intercessor when things are lost.
His icon shows him in a deacon's outfit, holding a cross and a Gospel like a deacon circling around the altar. This is how people who he appeared to have seen him. Behind him in the picture are Luxor's Obelisks, a sign of St. Wannas' patriotism and connection to the city of Luxor.
May his intercessions be with us always.
Posted by Mariam Magar at 7:10 PM 2 comments:

Email ThisBlogThis!Share to TwitterShare to FacebookShare to Pinterest
Labels: Saints

H.G. Bishop Suriel Speaking Against the Persecution of Christian Copts in Egypt

This is not a translation, but I couldn't not share...
In light of the rising persecution of the Christian Copts in Egypt, the Coptic Orthodox Bishops of the United States have called for an ecumenical day of prayer and solidarity on Tuesday, December 14, 2010. His Grace Bishop Suriel was one of the speakers of the day, and he spoke like a true Christian - peaceful, respectful, bold, courageous, honest, and powerful. May God bless him. Please pray for the suffering Christian Copts in Egypt.
To listen to more speakers from that day, click here.
Posted by Mariam Magar at 5:55 PM No comments: 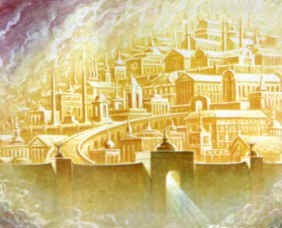 Mariam Magar
United States
I am Christian Coptic Orthodox. I love God and I love reading. I also love being bilingual. I feel that my friends who don't read Arabic are deprived of all the spiritual literature that isn’t translated into English. So, I enjoy translating the readings that attract my attention and spur my interest and thought. That's how the idea of this blog came about - to share these translations with more people. Most of the posts will be pure translations, but I may also share some English pieces that attract my attention or some of my humble contemplations. Enjoy!